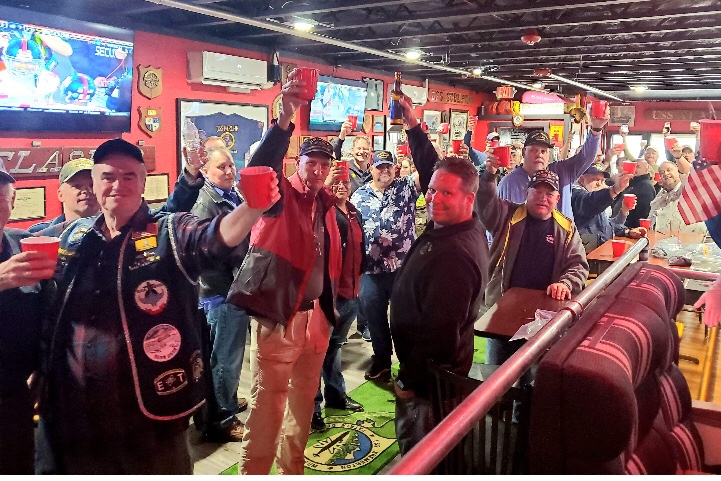 On May 18th, 2021 for the USS Bremerton’s (SSN-698) Decommissioning Ceremony at Keyport, Washington, a senior enlisted plankowner was selected to take one of the rare seats available.  This year was not possible to have more than 50 participants/attendees due to the strict COVID safety regulations observed by the Navy.

With respect to the late Bremerton plankowner and Chief-of-the-Boat, CMDCM(SS) Paul H. Gagnon, one seat was offered to the most senior enlisted man present at the Commissioning who also is expected to attend the Decommissioning Reunion in Bremerton.

When retired Senior Chief Gregory Carroll signed up to join the reunion in Bremerton, little did he know what was in store for him. He expected to be reunited with several of his fellow shipmates and plankowners including STSCS(SS)  Gordon “Gordy” Jennings USN (ret.) (a “Son of Bremerton”) and  ETCS(SS) Donald Jones  USN (ret.), but Senior Chief Carroll was then STS1(SS) Greg Carroll on the day of Commissioning (and with respect to other requirements set forth by the current Command) was selected to represent all enlisted plankowners and alumni who are unable to attend the ceremony in person.

Here’s a brief bio on our guy…

Gregory was born in 1954 and raised in Cape May Court House, New Jersey. He enlisted in the Navy in March 1975.

After completion of Submarine Sonar “A” School at Fleet Anti-Submarine Warfare Training Center Pacific he reported to the USS Thomas Jefferson SSBN-618 Blue where he served from Dec 1975 until Jan 1978. He then returned to FLEASWTRACENPAC to attend Sonar “A-2” and “C” Schools and AN/BQQ-5 Advanced Maintenance Practices from Mar 78 until Mar 79.

In Dec 78 he married Jolyn Carter who was from Eagle, CO.

He reported to the PCU Bremerton SSN-698 in Apr 79 and served on her until May 1982 as a Sonar Supervisor.

Gregory then received orders to COMSUBPAC Staff and was assigned to the Tactical Weapons Training and Certification Team until July 1984.

In Aug. of 1984 he reported to COMNAVSEASYSCOM where he was the Sonar representative on the SUBACS Operability Review Team (SORT) and worked on the Seawolf SSN-21 design and arrangements.

Dec 1988 he again reported to COMNAVSEASYSCOM where he served as Chief Engineer for RADM Doug Volgenau PEO-Submarine Combat and Weapons Systems until 1993 where he was transferred to PMS-450 the Virginia Class Submarine Program Office.

Gregory retired from the Navy in July 1995.

After retiring from the Navy Gregory continued to support the Virginia Class Program Office working as a contractor at several different companies.

Gregory and Jolyn have 1 daughter (Alissa) who was born in Hawaii in 1982.

Gregory retired totally in October 2015. He and his wife Jolyn currently live in Dumfries, VA and spend their winters in Boynton Beach, FL.

This is a preparatory blogpost just to key-in 698 Reunion attendees on the need for an accurate headcount for the DECOM DINNER to be held at the beautiful Kiana Lodge.

Please feel free to leave comment to signal your desire to attend before the official webpage is released.

Sponsored by the Bremerton-Olympic Peninsula Council of the Navy League

IMPORTANT UPDATE: MAY 4, 2021. Governor of Washington pauses any change to COVID phases for 2 weeks due to most recent indications that recent wave has passed a plateau and appears to be receding. This means that no changes are expected prior to the Bremerton’s DECOM date.

Here is a State Gov. reference:

KITSAP, currently being in Phase 3 (green), allows for greater capacity in public places than in Phase 2 (yellow).

Next official trend update is May 3rd, 2021. State and County agencies monitor changes by the day.

FYI, the Cities of Bremerton and Poulsbo are in KITSAP COUNTY.

Please comment for additional information of those in this photo