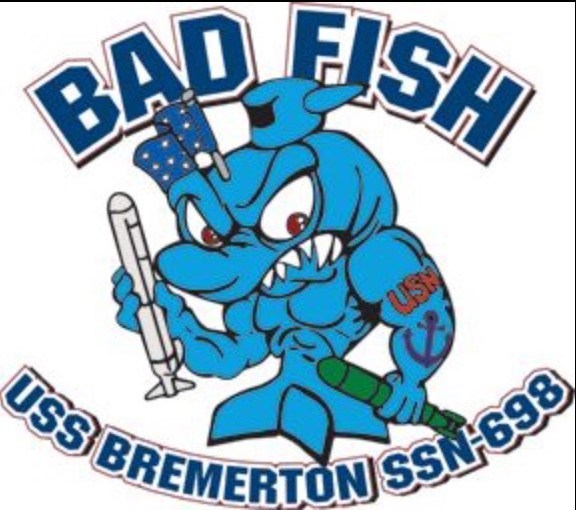 Originally titled and published in April 2017 as: SSN-698: The Origins of the BAD FISH.  It is being republished as part of an effort to consolidate popular 698 stories under BremertonReunion.net.

The history of the U.S. Navy’s Los Angeles Class fast attack submarine USS BREMERTON (SSN 698) would have been changed foreverhad it not been for an unresponsive and unmanned Air Force recruiting office, delinquent in their duties to respond to the calls of a young man named Clinton Ceralde.

Back in 1992, Clint found himself captivated by a billboard sign advertising the good life in the Wild Blue Yonder.

He made the trip to his local military recruiting office to discover the flyboys not doing their duty, the office was closed. Soon he found himself a magnet for the nearby ARMY and MARINE recruiters, sort of like being a prospective buyer in a used car lot. Clint found himself clearing datum when he crossed the bow of a couple of sailors lounging in their recruiting office telling sea stories.

Not wasting a trip to the recruiters, Clint entertained the Navy opportunity and steeled himself up to ask the two Navy men, “What does the Navy have to offer me?”

To that, one of the Navy recruiters asked him, “What do you have to offer the Navy?”

It turns out Clint was up for a challenge.

The Air Force will never know who they missed out on.

The origins of the BADFISH logocome from the artistic talent of Clint Ceralde while stationed aboard USS Bremerton SSN 698, where he served as a Quartermaster from 1992-1996. There he achieved the rank of QM2/SS.

Inspiration can bring out your talent, as Clint puts it, “I did not have any prior graphics experience, except that I liked to draw.” He entered his idea in a command drawing contest for the boat’s softball team in 1993.

His passion, imagination, and willingness to work on his idea helped provide the winning design for the team’s logo along with the name Bad Fish.

Clint recalls some thoughts in the process of the naming of his character, “The drawing was originally “One Bad Fish”, later shortened to just “Bad Fish”. He also credits shipmate QM2 Michael Rhodes for contributing the idea of including the mine in the right hand in the 1995 design (see below).

The “Westpac 95-USS Bremerton” drawing is a major evolution of Clint’s original design. “If you look under the stern, you can see my signature “Salty”, which was my nickname onboard. Next to Salty, is the letter Z, to give credit to the officer who did the lettering [a rider from the USS Alabama (SSBN 731)].”

In the late 1990’s, Clint’s mighty submarine character was again reunited with the name “Bad Fish” as QM2/SS Michael Rhodes entered them into another command contest. Ultimately the winning design was shopped to a professional graphics artist to compose what most of the public knows today as the Bremerton’smuscular six-pack-ab equipped “BadFish” character with the fists full of torpedoes. The image has since been reproduced on a number of collectible items ranging from paperweights to cigarette lighters and coins to stationary, just to mention a few.

The boat’s official logo is copyrighted by the professional artist, but now you all know how our own Clinton Ceralde brought the popular Bad Fish character to life.

Where is he now?Mr. Clint Ceralde has since made a big career move by earning his Commission in 2006. At the time this article was written in 2017, he was serving at Commander Naval Surfaces Pacificin sunny Coronado, California.  Here is a photo (below) of Clint and some of this shipmates back in the day…

The Proliferation of the Bad Fish (just a few samples)

“Imitation is the sincerest form of flattery”