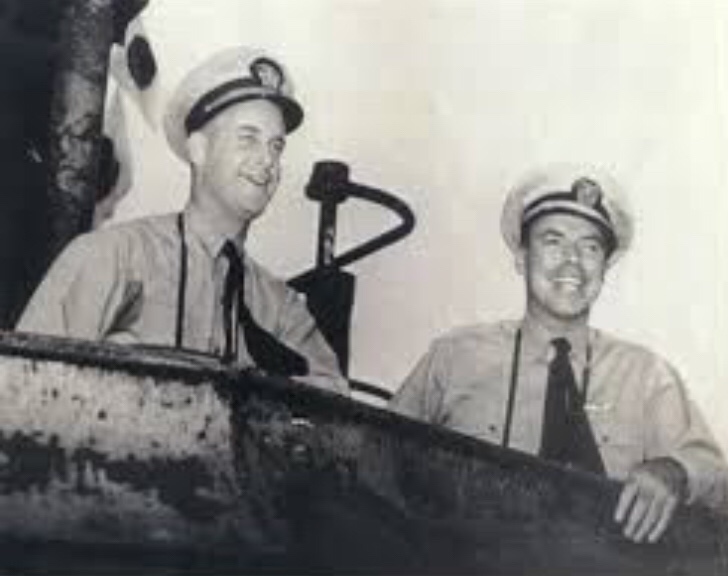 O’KANE IS HIS EXEC

The heritage we share as members of the US Navy’s Silent Service: The New Year’s submariner story of leadership, teamwork, audaciousness, intelligence, and innovation right before Wahoo’s 3rd War Patrol. Raw nerves required.

Late in the morning on the last day of 1942, without ceremony, Dudley W. Morton took command of Wahoo. Back at the apartment my new captain told of the PCO school he had attended just before coming to Pearl.

“Commander Patterson and Hensel were our underway instructors, and while I was on the scope calling angles on the bow, reading the telemeter scale for the range, giving orders to the steersman for rudder and speed, whirling the ISWAS, and checking plot for the new course, the instructors would be making entries in their notebooks. After the approach, they’d compare my actions that were recorded in the Quartermaster’s Notebook with their recommendations. Because they could concentrate solely on conning, they almost always arrived at better submarine maneuvers and more quickly.”

Captain Morton paused, but only long enough to bring over a bottle of ale, and then continued.

“Now you’re going to be my new co-approach officer, not my assistant. You’ll make all of the approach and attack periscope observations, or on the TBT if we’re on the surface. I’ll conn Wahoo to the best attack position, and then you’ll fire the torpedoes.”

He paused again, and his serious countenance changed to the usual engaging smile as he added, “This way I’ll never get scared.”

This opportunity and sharing of responsibility was new within our submarine forces.  I answered with a simple, “I appreciate your confidence, Captain,” and told him I was off to the Sperry to make a lazy susan for our ship models. I would need them to sharpen the ability to call angles on the bow quickly and accurately.

There’d be no fired oysters or tuna delight this evening, for we had all been invited to a New Year’s Eve party….

Regarding the “down the throat” shot, Dick O’Kane writes of the moments surrounding the firing of the final torpedo in Wewak Harbor:

…The destroyer continued her turn, completing three-quarters of a circle, and then headed down the still visible fan that had been left by our torpedo wakes. Their apex marked our firing position, and the enemy would know that a submarine could not have traveled far.

“That’s all right,” said the captain, “Keep your scope up and we’ll shoot that SOB down the throat.”

… the wire was steady on. “Fire!” and we headed for the bottom, rigging for depth charge.

The range on firing had been 750, which was the best, especially since the time for our first torpedo hit had now gone by. The props of our last torpedo had been blanked out by those of the destroyer, which were now roaring through our hull. There was no other noise, only her screws now menacingly close. We were passing 80 feet, and men commenced bracing themselves for the coming depth charges; though still confident, I chose the spot between the scope and the TDC.

The first depth charge was severe, but only to our nerves, and we braced ourselves in earnest for the pattern that would follow. A mighty roar and cracking, as if we were in the very middle of a lightening storm, shook Wahoo. The great cracking became crackling, and every old salt aboard knew the sound – that of steam heating a bucket of water, but here amplified a million times. The destroyer’s boilers were belching steam into the sea.

“We hit the son of a bitch!” rang out in unison from the whole fire control party, and doubtless throughout the boat. Never could apprehension and despair have changed to elation more abruptly. Already, George had an up angle on the boat in anticipation of the captain’s order, and with speed to help, had Wahoo back at periscope depth.